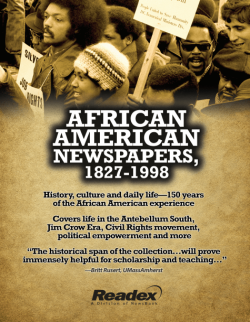 NU Library has just added a new database: African American Newspapers from Newsbank/Readex. It is a searchable collection of newspapers published by or for African-Americans from 1827-1998. (Note: You will be asked for your PurplePass login if accessing these links from off-campus.)

This is just the latest library resource that focuses on African-American history. Our others include: