February is Black History Month (also called African-American History Month) so let's look at some of NU Library’s resources on the topic. 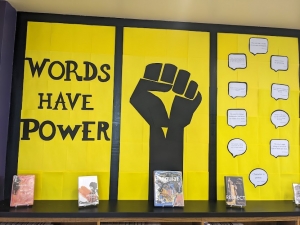 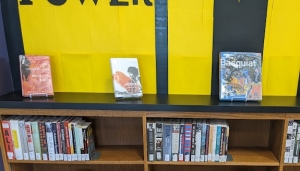 On the 2nd floor, our Words Have Power display celebrates and highlights black voices. DVDs such as A Raisin in the Sun and books such as The Immortal Life of Henrietta Lacks are available for checkout.

We have many databases that cover African-American history, from primary source documents to more recent magazine/journal articles. (Note: You will be asked for your PurplePass login if accessing these links from off-campus.)

African American Newspapers from Accessible Archives
Contains a wealth of information about cultural life and history during the 1800s and is rich with first-hand reports of the major events and issues of the day.

African American Newspapers from Newsbank/Readex
A searchable collection of newspapers published by or for African-Americans from 1827-1998.

Black Life in America
Covers the experiences and impact of African Americans from 1976-current day, as recorded by the news media.

Civil Rights and Social Justice
Hearings and committee prints, legislative histories on the landmark legislations, CRS and GAO reports, briefs from major Supreme Court cases, and publications from the Commission on Civil Rights

Ebony Magazine Archive
Covers civil rights, education, entrepreneurship and other social topics with an African-American focus. It includes more than 800 issues providing a broad view of African-American culture from its first issue in 1945 through 2014.

Oral Histories On The Civil Rights Movement
Transcriptions of nearly 700 interviews with those who made history in the struggles for voting rights, against discrimination in housing, for the desegregation of the schools, to expose racism in hiring, and in defiance of police brutality.

Slavery and Anti-Slavery: A Transnational Archive
Includes books, pamphlets, newspapers, periodicals, legal documents, court records, monographs, manuscripts, and maps from many different countries. It covers a wide spectrum of topics related to the history of slavery.

Slavery in America and the World: History, Culture & Law
Legal materials relating to the history of slavery in the United States and the English-speaking world. This includes every federal, state, and colony statute on slavery, as well as all reported state and federal cases on the subject.

"We Were Prepared for the Possibility of Death": Freedom Riders in the South, 1961-1962
Documents from the FBI, including surveillance reports, chronologies, witness statements and more regarding the Freedom Riders, civil rights activists who challenged local laws/customs that enforced segregation in the South.